What Everyone Ought to Know About Concussions 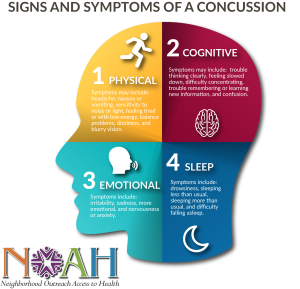 Would you be able to recognize when your child has had a concussion and what you should do about it? It is important for parents, players, and coaches to be able to recognize a concussion and know what to do next. Concussions are becoming more common now than ever before. The CDC (Centers for Disease Control) has reported that in the last 10 years the number of concussions in young athletes has doubled with as many as 3.8 million in 2012. It is estimated that 1 in 5 high school athletes will sustain a concussion during a season with 33% occurring during practice. Every sport comes with some level of risk. Concussions are not only common in football but also in sports such as soccer, lacrosse, basketball, wrestling, softball, volleyball, cheerleading, and baseball. Girls are at higher risk than boys to suffer a concussion in a similar sport. A concussion can also happen off the playing field such as in a car accident, fall, bicycle accident, or during a physical fight.

What is a concussion exactly?

A concussion is a traumatic brain injury that is caused by a bump, blow, or jolt to the head, or by a hit to the body that causes the head and brain to move rapidly back and forth. The brain is a soft tissue that is cushioned by spinal fluid and inside a hard skull. During an injury it moves around in the skull and bangs against it causing damage to brain cells. Sometimes what seems to be a mild bump or blow can be serious. One important point to remember is that you can’t “see” a concussion on imaging unless there is more serious injury. It is recognized by the signs and symptoms after the injury.

What are the signs and symptoms of a concussion?

Signs and symptoms from a concussion begin in the first 24-72 hours after the incident has occurred.

Physical signs and symptoms may include:
• Headache.
• Nausea or vomiting.
• Sensitivity to noise or light.
• Feeling tired or with low energy.
• Balance problems.
• Dizziness.
• Blurry vision.

If you, your child, or coach notice any of these after a blow/bump/jolt to the head pull the player out of the play or practice and see a doctor before allowing your child to return to play.

How does a doctor diagnose a concussion?

The health care provider will diagnose a concussion by asking questions about the injury, identifying the signs and symptoms, and by examination. Rarely will an order for imaging be needed to diagnose a concussion. The athlete may be referred for more testing as needed. A detailed plan for recovery and instructions on when to return for medical clearance should be given.

How is a concussion treated?

After a brain injury such as a concussion the brain and body need rest to recover. The first part of the plan is to rest the brain from activities that require concentration and focus. This includes limiting schoolwork and testing, restricting the use of electronics including video games, TV, cell phone use, and computers. Brain cells need to time repair themselves. Time helps the healing process and the effects of the concussion should lessen as symptoms decrease and become more tolerable.

The second part of the plan is physical rest. Once an athlete is able to tolerate school and is without symptoms at rest, they can slowly return to physical activity in a stepwise manner. Initially start with some light activity, progressing to sport specific exercise without head impact or contact, noncontact training drills with some light resistance training, and finally after medical clearance full contact practice. Each step should take at least 24 hours and if at any time symptoms worsen or return, they must return to the previous step. Remember, ignoring the symptoms and trying to “tough it out” can make symptoms worse and increase the risk for a more serious injury.

Is there anything that can be done to PREVENT a concussion?

It is important to follow the rules for safety and the rules of the sport to decrease the chances of a concussion. An athlete should practice good sportsmanship at all times. Wearing the right protective gear is important.
• Protective gear includes:
• Helmets.
• Padding.
• Eye and mouth guards.

Make sure the gear fits properly, is well maintained, and worn consistently in order for it to be protective. Since not all concussions can be avoided, a parent, player, or coach must be aware of the signs and symptoms and what to do in the case of a concussion.

Concussions are serious injuries and can become more serious if not recognized and treated properly. Become educated and follow the health care provider’s direction for rest and recovery.